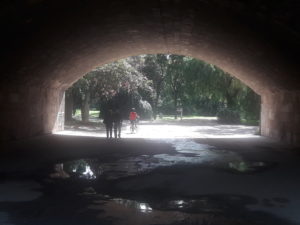 The river Turia which used be a running river though de to uncontrollable flood at 1957  it is diverted to another route and the old riverbed exists as a grand green-space lying all along the city.  It is known as the biggest park of Europe. Imagine yourself walking in a park that used to be a riverbed, in which now there are millions of plants and trees living in. I always imagined myself as a cycling fish when I walk (usually cycling) in Turia. Turia starts from Truel province, passes through Cuenca and meets with the sea from the coast of Valencia.